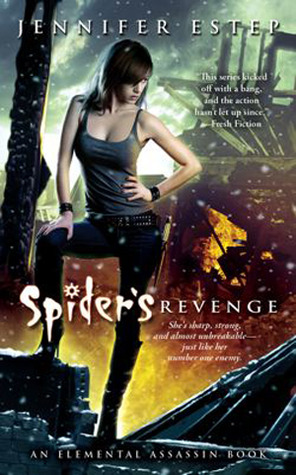 The fifth Elemental Assassin entry aims to wrap up the long standing arc since Book 1. It’s Mab Monroe vs. Gin Blanco aka The Spider aka Genevieve Snow. It’s the final show down to prove once and for all who is the strongest. Mab is pulling out all stops to finish what she started 17 years ago while Gin’s not backing down to exact revenge that she’s been working towards since then herself. Who will win?

This series has so much potential, but I’m disappointed that things really didn’t get going until the half way point. Estep spends the first third of the book practically summarizing what’s happened in the previous books which annoys me to no end. It drastically affects my enjoyment of the book; this was the same pitfall for the previous installment. A pattern is now obvious.

Once you get over that, there are some moments and parallels that I saw coming from a mile away, but I still enjoyed them regardless. We learn back story about a couple of supporting characters and we get to see others characters finally in action and kicking some ass, which I liked as well.

I’m typically drawn to series that are primarily character-driven, so a lot of the time I will gloss over the action, but Elemental Assassin is one of the few where I really get into it. I read this series for the action moreso than the characters if I really think about it. The pace is just right, the intensity is there, and it’s not very confusing. I think it really helps that we’re in the mind of a stone cold killer. She’s not some innocent girl still finding herself and trying to react to the bad guy. Gin is genuinely a badass, so I do give the series props for that.

While the action is at an all time high, due to the continuous repitition, the predicability, and the over-explaining (Estep literally makes a page out of something that could be one sentence), I can’t ever give this series more than 3 stars until the author gets over those glaringly lazy attempts to fill pages. It needs more substance. Period. The first couple of books are exceptions for obvious reasons. But at this point, each new installment is essentially a novella of a story at the price of a novel.

Tangled Threads – Not quite as good as its predecessors

Coming off of the high from Venom, I had a lot of high hopes for Tangled Threads, Book 4 of the Elemental Assassin series. Unfortunately, it comes up a little short for me.

Unlike the prior novels, where it kicks off with high action, this book definitely has a slower pace. After taking care of Elliott Slater, Gin has sent Mab Monroe a message (as the Spider of course), and Mab’s listening. She recruits another assassin, a damn good assassin, to come in and deal with The Spider who continues to pick off Mab’s men, making her empire seem vulnerable to the other underground players. Gin may have finally met her match as Elektra LeFleur is an elemental with the power of electricity, and it’s every bit as strong as Gin’s ice and stone abilities.

Mab’s got other plans as well, attempting to start a new nightclub that would make the sex-infused Northern Aggression look like Barney and Friends. It would feature the 8-year-old daughter of one of Northern Aggression’s employee’s. Can Gin save the little girl in time to keep her from being a victim of pedophilia and other abuse?

Gin’s long lost sister, detective Bria Coolidge, gets more screen time and interacts a lot more with Gin. All 3 (Bria, and Gin as Blanco and The Spider) are huge targets, obviously making things a bit complicated, but when isn’t it for Gin? Will Bria figure out that Gin is her sister in this book? Where do they go from there?

This book honestly felt like filler to me for the first half. In prior books, I wasn’t quite as annoyed with the repetition, but this time it was so rampant. Most readers will not start a series at Book 4, so there is no need to cater to an obvious minority and rehash ad nauseum pretty much everything that happened in the prior books…more than once. The character details are glaringly repetitive (it’s been beaten over our heads that the spider is a symbol for patience) as are Gin’s one liners like “sloppy sloppy sloppy” “enemy enemy enemy”. We get it already! These books are not very long to begin with, so if they will be short, the plot needs to move along.

I really do not get her obsession with Donovan Caine. It was a matter of days that they interacted over a course of weeks and they hooked up twice. Does she even know his middle name? And yet she is soooo broken up about his rejection of her when she know very well that’s the reaction most people are going to have when they learn of her “day job”. Those two didn’t have the kind of connection to me that would warrant her love-sickness lasting throughout the series, so what’s the big deal?

I was also a bit annoyed about Owen Grayson. I do believe they are moving a bit too fast and he’s fallen for her a bit too easily. It sort of takes the fight out of them finding their way to each other, which I honestly sort of like in my favorite series. I also wish we could see him in action more. His powers are put to use, but I feel like he could be a true badass; if not as good as Gin, then at LEAST as good as Finn.

With that said, once the action got going, it was up to Elemental Assassin standards. I was much more engaged in the latter half, but Elektra’s introduction sort of distances the reader from the heart of the story. With Elliott Slater’s death, you felt like Gin was getting closer to Mab. It doesn’t quite feel the same when Estep keeps bringing in enemies that shield Mab. It slows progress on that front, but the developments in Gin’s personal life keep this book from being considered completely as filler.

I would recommend starting this series from the top, but with how it’s written, I am assuming that the author doesn’t want this to be necessary. I would not recommend starting on this book simply because it’s not the best installment in terms of quality. With overarching plot lines, these books really shouldn’t be stand alones, and I definitely hope that the repetition is toned down significantly in the next book.