If you have any favorite reads for this year please share! 2012 has been quite a year for me. I’ve read some incredible books, some great books, some not so great books, some terrible books.  But overall it contributed to read count of over 131 stories this year. It’s kind of funny because I feel like a slacker compared to some other Goodreads friends who I’ve seen read over 400+ books; one even read over 900. But good or bad, I’ll take it as a victory. Communiting to and from my job takes a good 2 hours of my day, which allows me to and dedicate most of that to reading. A broken iPod has helped quite a bit too, but Christmas kind of rectified that so I’ll have to see how my read count in 2013 compares. But in the meantime, I want to narrow things down and present my favorite urban fantasy/paranormal books of 2012.

Ever After ARC (The Hollows #11) by Kim Harrison

I debated listing this one because it technically doesn’t come out until 2013, but it rocked my personal socks this year, and I’m sure it will rock yours in January, so I’m going to list it.

All Dorina Basarab novels, including Fury’s Kiss by Karen Chance

Though I was fairly familiar with its original sister series, Cassandra “Cassie” Palmer, I was really surprised to find that I love this series infinitely more. It’s got all of the pluses, none of the annoyances. Dory is a riot, but she kicks ass too. It just pains me that it take 2 years between books.

Wicked as They Come (Blud #1) by Delilah S. Dawson

Early on in the year this was my favorite book.  The world was new, interesting and exciting. And Criminy was awesome! I definitely can’t wait for the next book featuring him and Tish, but much like Karen Chance, this author alternates from book to book.

A Perfect Blood (The Hollows #10) by Kim Harrison

Yes, the Hollows takes two spots on my list.  In addition to the Ever After ARC, with all of the different publications this year from Into the Woods to Blood Crime to Trouble on Reserve to Trent’s POV from the paperback of A Perfect Blood, two spots can’t be surprising. However, while good, this book wasn’t quite in the same class as Ever After, but I did love it.  And like most Trenchers out there, Trent’s POV left me speechless! Oh and it’s also pretty awesome anytime I can meet Kim Harrison!

This was another fantastic finish to a wonderful trilogy.  I was fortunate enough to read the ARC for this series and I loved it! If only there was more!

I wanted scary and I got scary! Just a little more than I bargained for with the weird crap that was happening OFF the pages while reading it.  And funny enough, there was no repeat of that peculiar activity after I was done. I have since stopped here, but there are definitely more books with Dex and Perry’s adventures. I plan to get to them after catching up with the Night Huntress series that I’m currently reading.

I read this book at a pretty difficult time. I started reading it and then I got my hands on the Ever After ARC.  I was riding too much of a high for anything else to compare, including this.  But in hindsight, this book rocks and I bet the next book will be my favorite of the series!

Tale of the Vampire Bride by Rhiannon Frater

I was gripped from beginning to end on this one. It’s not an easy read, and do not mistake this for a romance. It’s more like one of those train-wrecks that you can’t look away from.  Unfortunately the sequel was nowhere near as good, but I hope this series continues eventually. I would love to read a third book if it could get back to the level of book 1.

Angelfall (Penryn & the End of Days #1) by Susan Ee

I have a bit of an aversion when it comes to the Young Adult genre, but this is an exception. I LOVED this book and I often find myself wondering how long it’d be until the second book is released. That’s definitely a sign of a book worthy of this list. Even better, it’s probably the best $0.99 I’ve spent on a book!

Though this trilogy arc is complete, this book is probably my favorite of the three. I finished wanting more, more, MORE!

Iced (Dani O’Malley #1) by Karen Marie Moning – I definitely didn’t inhale this one as fast as the original Fever novels, but it did leave an impression. Honestly though, I just want more Mac and Barrons!

At Grave’s End (Night Huntress #3) by Jeaniene Frost – The review is pending right now because I wanted to post this year in review first, but I did enjoy it the most of the three novels thusfar. This series isn’t really among my favorites, but it seems to be positioning itself in the tier of series that are right below my favorites.  Not a bad place to be. There’s Bones to thank for that.

Fire Baptized (Habitat #1) by Kenya Wright – I inhaled this book as well.  This fresh take on the urban fantasy genre was just what I needed at the time and unlike some series where the sequels don’t measure up, its sequel certainly did and I look forward to book 3!

Warm Bodies by Isaac Marion – I enjoyed this book quite a bit, as well as the movie. It presented a different take on the genre that I found refreshing.

A Blood Seduction (Vamp City #1) by Pamela Palmer – an alternate Washington, DC gets some bonus points!  This book introduced a pretty intriguing world. I read it in a day and enjoyed it, so that’s why it gets a mention.  Just beware that this isn’t true romance.  If you go in with those expectations you’ll likely be disappointed.

The Fire Lord’s Lover (The Elven Lords #1) by Kathryne Kennedy – I read this particular book in one day and I loved the world building and build up to the eventual romance. Unfortunately the sequels never really struck the same chord.

So all in all it’s been a good year! This blog has been good to me. YOU guys have been good to me. And I hope 2013 is even better!! The great thing about books is that there’s something for everybody.  I wish you all a very Happy New Year!

Vampires introduced me to the paranormal romance genre. Before these fanged creatures, I only read chick lit and serial killer novels. So today, I show my love for all the great vampire romances I’ve encountered. Here’s my top five!

(Warning: Your blood may rush through your veins at a face pace as well as heat with energy. Be very careful when reading these books.)

The Vampire Lestat by Ann Rice 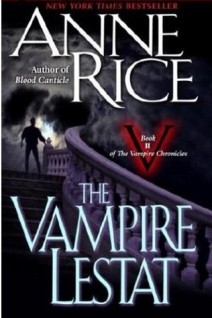 If you haven’t met Lestat, then you aren’t a true vampire romance reader. He is the rock star of the vampire world (and he looks like Tom Cruise)!
Fledgling by Octavia Butler

First of all, Octavia Butler is one of the most amazing African American authors out there! Not only does this book present a new concept of vampirism, but it also provides a discussion of sexism and race. WARNING: You may not be able to deal with the sex scenes because the main character looks like a little child.
Halfway to the Grave by Jeaniene Frost

Oh my god! The Night Huntress series is book crack for the soul! Cat and Bones exemplify a drool-worthy affair! Grab this if you haven’t already.

This is a cult favorite for all true vampire romance fans! Anita Blake is said to be one of the pioneer heroines of the genre.
Bloodsucking Fiends by Christopher Moore 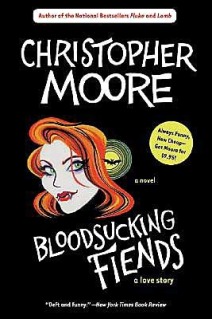 God! This is a hilarious book with great love scenes between the laughs.
So there you have it, my top five vampire books. If you haven’t read one of these books, I demand you pick it up immediately. I would love to hear what you think! Feel free to drop me a line on goodreads HERE!  I’m always on there blabbing about books that I hate or love.

Bestselling dark fantasy author Kenya Wright lives in Miami with her overactive kids, yummy hubby, and three cats that refuse to stop sleeping on her head.

Wright got it right! What an impressive debut effort!

Not to break up the Hollows party or anything, but I figured I should throw in a new review ~_^.

Review:  Kenya Wright’s Fire Baptized pleasantly surprised me! Just when I start to wonder if I’m just reading too much Urban Fantasy, I run into a fantastic story like this one.

There are no secret supernaturals here. Since the ’70s humans have isolated these species to live in restricted areas. Think District 9 with a little less slum…in some parts of town. They identify all of the different species with brands on their foreheads. Of course there is a class system within their kind, with mixbreeds being on the bottom. Our main character, Lanore, is one of these mixbreeds. Armed with the power of fire, she is far from helpless, but she doesn’t really look for trouble either; it merely finds her.

She ends up in the wrong place at the wrong time when she witnesses a grisly murder, eventually making herself a target for this satanic killer. The biggest fear is of the unknown. And to stop this killer she has to team up with a couple of hunky–but helpful–friends as she investigates the murder herself and tries to stay alive.

The world building is fantastic, intriguing, and easy to follow. Some of the characters and the monsters are awesome too, if not a bit sympathetic at times. The story is a shorter read than most, but it still qualifies as a novel and I felt that it was the perfect length. Because of this, I can honestly say that I wasn’t bored for a second. I would say that it’s a lighter Urban Fantasy with some dark elements to it because I did find myself laughing a good deal of the time.

Lanore is an African American character so I thought it was awesome to change it up from what we usually see (not that I don’t love that too). It’s just great to see diversity in this genre. I also really liked the descriptions of how she uses her fire power.

I don’t like love triangles and this one didn’t change my mind. That is pretty much the only harp I have with this book, so I grinned and beared it. Though there is interracial romance, the racism and discrimination is a species-based issue and it gets pretty ugly, making you really question “humanity” or the lack thereof.

Overall I am truly impressed, especially considering that this is Wright’s debut novel. It kicks off strong and never lets up. It was a very imaginative world and I am eager to read the next book. While this book solves the mystery, there is definitely a larger overarching plot that is developing, so we have a lot more to look forward to.

And on one last note, I must say that I love love love the subtlety of the cover. I think it looks great!

*ARC provided by the author